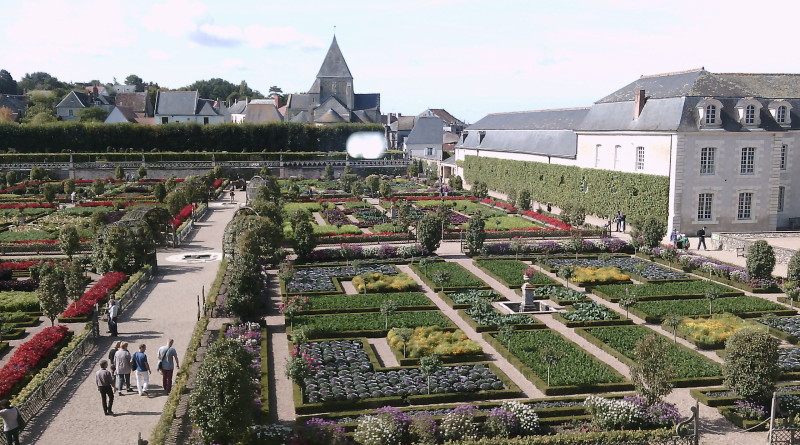 It was a wonderful feeling to be able to ride out of our hotel under a cloudless blue sky. Considering the dramatic change that had taken place in the local weather, it made me think that we should have started the ride three days later than we did.

Tours has some glorious wide streets lined with huge trees and we followed one these beautiful streets past the Hotel de Ville as we made our way our of town. We learnt that the population of Tours is around 160,000 and it was obvious that there has been a lot of work put into developing local infrastructure. The trams and buses were the fanciest I have ever seen, although we never had a chance to actually try them out.

After about 20 minutes we broke free of the city and then followed the Le Cher river for quite some distance. This river runs parallel to the Loire for quite some distance before finally joining it at Cinq Miles la Pine. The riding was again absolutely delightful and somehow we managed to mostly stay in some semblance of cohesion as we rode along.

A few kilometres from Tours we noticed that the trail was almost blocked by a number of caravans and motor homes that had been parked tightly on both sides. At first I wondered what was going on, until I quickly realised that we had ridden straight into a cluster of gypsy caravans. As soon as we neared we were approached by one of the young gypsy boys who started following and shouting something at us. We quickly rode through the caravans, making sure to hold tight to our belongings and were all able to safely resume our journey.

A short distance further on is the famous Chateau at Villandry. At the start of the ride I had made the decision that I was not going to try and visit every chateau, or even every second or third one for that matter. For me, the ride was never about the chateaux or huge churches, it was about becoming a part of French life. Neither Maggie or I have even taken a single organised tour since we arrived in France almost two weeks ago. On the other hand I did say that we would probably visit one or two castles and that would be enough for us. The rest we would be happy to just see from afar.

The Chateau at Villandry is famous for its incredible ornate gardens and it was that reason alone that persuaded us to part with 10 Euros each to visit the building and grounds. I learned that this castle was built by the Finance Minister of King Francoise 1st. When you see the size and opulence of the place, it would appear that Finance Ministers must have been very well rewarded for their services (or maybe they just made sure that a lot of the state finances went in their direction).

I must admit that I was a little underwhelmed at the inside of the castle, but the gardens were something else entirely. Whenever I have tried to set up even a small vegetable plot, the only things that flourished were the weeds. Yet here were acres of hedges, flowers, vines, trees and assorted vegetables where not even a blade of grass was out of place. When I looked down into the large moat I was met with return stares from dozens of huge carp. They crowded to the surface with their mouths open and I imagined them to be pleading with me to save them from being eaten. I could not resist sampling a couple of grapes from the overhead vines and then spitting the pips surreptitiously into the garden bed.

After 75 minutes of wandering the chateau and its gardens (and ignoring the pleading of the fish), it was time to move on. We discovered that there were two alternative routes from Villandry to Azay le Rideau and spent some time trying to decide which alternative to choose. After a period of collective confusion I made the decision to follow the river a little further. This meant that we able to stay on the top of the high levee bank and enjoy some great cycling before turning away from the river a few km further downstream.

Whichever way we went we knew that there would have to be a hill to be crossed before reaching Azay le Rideau. And there was. It was interesting to note that, even though we have been riding for only a few days, it is already obvious that the strength of our riders has improved in that time. Although the climb was extended, the gradient was not too extreme, and I think that many of the team actually enjoyed the challenge of being able to pedal to the summit.

After reaching the summit we had a great downhill the rest of the way to town. A short time later we were checking to the lovely Hotel de Biencourt. This hotel was located in what used to be separate boys and girls school buildings. The proprietor welcomed us warmly and insisted on carrying our bags to the rooms.

The town itself is a real gem, with narrow cobblestoned streets and dozens of medieval buildings. We were also delighted to discover a shop that supplied the first milk shakes we had seen in a long while. After a walk around the town I returned to our room to shower and change for dinner.

One thing we have noticed on this trip is that hotel showers come in an almost infinite variety of configurations and no two are exactly alike. I stood naked outside the spacious shower  recess and looked at the complex array of controls, buttons and pipes. It looked like the control centre of Dr Who’s time machine. I decided to do what any enterprising man would do and simply turned the first control my hand touched. I was immediately met by a horizontal jet of scalding hot water that sprayed out of the shower recess and across the bathroom. When I rapidly tried to turn it off I must have turned it the wrong direction as the jet turned into a torrent. In something of a panic I yelled out in pain and started rotating every pipe and tap I could find. In a few minutes I finally had the situation under control, although by that time, the place looked like Albert Park Lake.  I blamed the unfortunate incident on a combination of lack of instructions, poor eyesight and senility. When I finally worked out how the system worked I stayed under the deluge for a very long time.

Our dinner for the evening was at the, apparently Michelin rated, Cote Cour Restaurant, which was just a short walk from our hotel. It did not take long for us to discover just why the place was so highly rated – the food was SUPERB. The only small problem was that the waiter kicked my chair leg every time he walked past my chair. The first couple of times he apologised, but after the count went past ten kicks, it did not seem to matter any more. I suspected that he must have had a huge bruise on his foot by that time, and I wondered if I should start apologising to him. Since my chair was already pressed hard up to the table, there was nothing more that I could do to get it out of his way.

In spite of this small irritation I have to admit that it was one of the best meals I have had in a long, long time and I am sure that it will remain a highlight of this trip. As we walked the silent streets back to our hotel we met a local women who was walking her two small dogs and her cat on their evening walk. France is somehow just like that and it seemed the most normal thing in the world. Overhead the waxing moon cast a pale glow over the ancient rooftops. It had been another magical experience that we will never forget.